Here we invite Zimbabweans and all concerned friends of Zimbabwe to post their view directly! THE QUESTION IS... "WHAT, IN YOUR VIEW IS THE WAY FORWARD IN ZIMBABWE??????".....POST IDEAS TO mufarostig@gmail.com. THANK YOU!!!

NB: THIS IS NOT THE MAIN PAGE!

THE REAL FIGHTER DEAD OR ALIVE WAS USED AND BETRAYED! 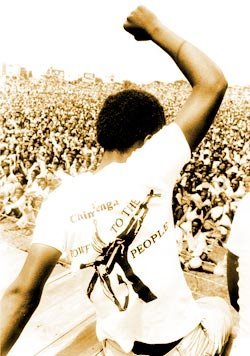 THE ONLY WAY FORWARD IS A "TRUTH AND RECONCILIATION COMMISSION!" 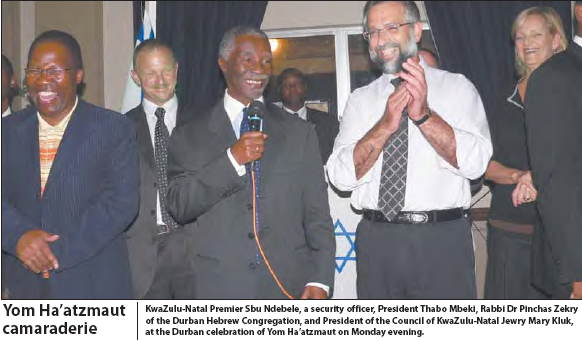 "is there any-one who understands the man?'

THE MDC PRESIDENT WITH THE LATE NATIONAL CHAIRMAN MATONGO! 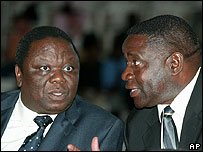 I HAVE JUST RECEIVED AN SMS ON MY CELLPHONE THAT THE MDC NATIONAL CHAIRMAN MATONGO HAS BEEN FOUND DEAD IN STRANGE CIRCUMSTANCES! WILL UPDATE AS INFORMATION COMES IN! ZIMFINALPUSH STAFF! Cell: 0791463039 RSA! 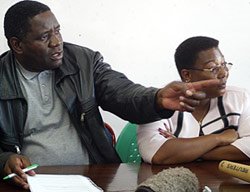 The New Zimbabwe has lost a dedicated cadre!

TSVANGIRAI UPDATES OF TALKS WITH MBEKI! 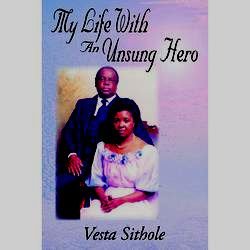 For Serialization of book refer: www.finalpushzim.blogspot.com

******All new postings from 29 April,2007 will be "batched" by date and you will get these on www.finalpushzim.blogspot.com OLDER POSTINGS WILL CONTINUE ON THIS HOME PAGE! ZIMFINALPUSH STAFF!

A VERY CRITICAL LOOK AT MUGABE AND MBEKI'S ROLE!

"..............................Mr. Mugabe has been a completely consistent leader. It's we who have changed. During the cold war, we in the West were so grateful that this militant Marxist had instantly become a benign capitalist that we ignored his history of political violence within his own party, and intimidation at the 1980 elections that brought him to power upon Zimbabwe's independence. We supported him in the same way we supported venal leaders like Mobutu Sese Seko of Zaire - our friends simply because they were not Moscow's. .................... " MORE PLEASE CLICK (http://dearmrthabombeki.blogspot.com/2007/04/mbekis-role-very-critical-analysis.html)

BRITAIN CONTINUES TO PRESSURE THE U.N. TO CENSURE ZIMBABWE!

UNITED NATIONS (FinalCall.com) - The United Kingdom is again demanding that the UN Security Council place Zimbabwe on its agenda............... (http://dearmrtonyblair.blogspot.com/2007/04/britain-continues-to-pressure-un-to.html)


Yahoo! Answers - Got a question? Someone out there knows the answer. Try it now.
Posted by ZIMCITIZEN! at 12:15 PM